Located 28 miles west of Chicago, Naperville, Ill., consistently ranks as a top community in the nation in which to live, raise children and retire. This vibrant, thriving city is home to acclaimed public and parochial schools, the best public library system in the country, world-class parks, diverse worship options, an array of healthcare options and an exceptionally low crime rate. Naperville has ready access to a variety of public transportation, housing and employment options. The city’s diversified employer base features high technology firms, retailers and factories, as well as small and home-based businesses. With all the amenities of a modern city and all the charm of a small town, Naperville truly is the premiere community in which to live, work and play.

Recognized nationally and internationally as one of the top communities in which to settle down, raise a family and retire, Naperville has made headlines for its outstanding quality of life. Our picturesque, quaint city combines the values and charm of small-town life with the vibrancy and boldness of a modern, thriving economic powerhouse in the Chicago area.

Come see why Naperville is the place for everyone to Live, Work and Explore.

In Naperville, community counts. From newborns to those living in their happy golden years, Naperville is where families can set down their roots for generations to come.

In 2019, Naperville made SmartAsset's list of top cities where millennials are purchasing homes and was ranked one of America's "coolest suburbs" by Apartment Therapy. In 2018, Naperville was named the best city to live in Illinois on 24/7 Wall Street's list of Best Cities to Live in Every State as well as the Best City to Raise a Family in America by Niche. Naperville was also named the third best place to visit in 2018 by Livability, and in August, the City took the No. 12 spot on Safewise's 2018 Safest College Towns in the Nation report. 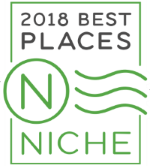 Naperville has also been named to Money magazine’s prestigious “Best Places to Live” list seven times since 2004, ranking No. 10 on the 2016 list, and was named the best place for early retirement by Kiplinger in 2013. In 2017, Naperville made Livability.com's Top 100 Best Places to Live list and came in No. 2 in Niche.com's Best Cities to Live In rankings. Naperville was also rated the safest city in America in 2017 by Niche.com as well as Homes.com.

Naperville was named the sixth safest city in late 2016 by SmartAsset.com and was also rated the third most successful city in the United States based on high median income and low poverty levels by Zippia.com, a career resource website. Also in 2017, the National Council for Home Safety and Security named Naperville number 14 on its list of the Top 100 Best Cities to Raise Kids in the U.S.

Our residents enjoy internationally accredited Police and Fire Departments that provide unparalleled levels of public safety. Our law enforcement’s dedication to addressing traffic safety concerns was recognized when our Traffic Safety Initiatives were ranked No. 1 in the world by the International Association of Chiefs of Police. As a recognized National Weather Service – Storm Ready Community, Naperville is prepared for severe weather when seconds count and safety matters.

In addition to being a safe community, Naperville enjoys a strong volunteer spirit that has helped develop some of the most notable community projects, including the Riverwalk. Every year, Naperville is home to a number of President’s Volunteer Service Award winners. In November 2017, the Naperville City Council awarded 26 individuals the President’s Volunteer Service Award totaling 5307 volunteer hours worked in CY2016! 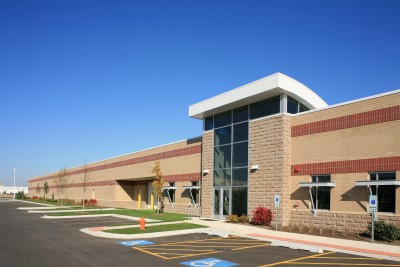 In Naperville, the City aims not just to serve the community, but serve it well. Part of serving the community includes stewardship over the natural resources that drew town founder Joseph Naper to this area almost 200 years ago.

In November 2016, the City was one of 25 public and private organizations honored with the Illinois Governor’s Sustainability Award for its citywide environmental sustainability efforts. Praised sustainability practices included successful and ongoing completion of all 49 goals in the City’s 2010 Sustainability Plan and specific projects including the Water Leak Detection Survey, the new Household Hazardous Waste Facility that opened in early 2015, the Recycling Cart Program, the Emerald Ash Borer treatment program and the City’s plans to construct a compressed natural gas (CNG) fueling station.

In 2008, Naperville’s nationally accredited Public Works Department received the U.S Green Council Leadership in Energy and Environmental Design (LEED) Certification for its new Public Works Service Center and commitment to producing a source efficient building that is better for our environment and better for our community.

Economic development and a successful business community are cornerstones of Naperville. Home to top-ranked businesses and organizations, Naperville has been awarded the Well Workplace Award by Well City USA and has been named in the “Top Earning Towns” listing by Money Magazine two times in the last four years. 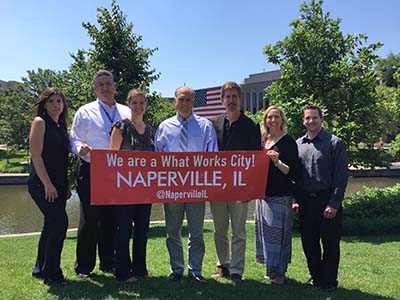 Continuous efforts for openness, accountability and honesty within the community are of high importance.  In June 2016, Naperville was selected as the first city in Illinois to participate in Bloomberg Philanthropies’ What Work Cities initiative – one of the largest-ever philanthropic efforts to enhance the use of data and evidence in the public sector. This exciting new partnership will allow the City to continue its focus on innovation, efficiency and openness to our community. 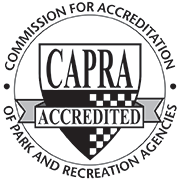 Many of the community’s organizations are recognized for being “best in their field.” First received in 2011, Naperville’s acclaimed Park District received accreditation status through the National Recreation and Park Association and is currently undergoing the reaccreditation process again. And in 2016, the DuPage Children’s Museum received Honorable Mention in the Education category for Vision Design Awards and also was honored with the Naperville Education Foundation’s Celebrating Inspiration Award.

City officials, businesses and residents are dedicated to preserving Naperville’s vibrant history while planning for a bright and responsible future that includes visitors enjoying all that Naperville has to offer.

In 2011, the American Planning Association, Illinois Chapter recognized Naperville’s innovative and state-of-the-art planning methods and practices to create a community of lasting value when they awarded Naperville’s Historic Preservation Initiative with the Best Practice Award.

Our community’s pride in education and community involvement through the use of flowers, plants, trees and other environmental enhancements has not gone unnoticed. Naperville is the proud recipient of the America in Bloom Award for Tidiness and has been an Arbor Day Foundation Tree City USA Certified Community for 23 years. 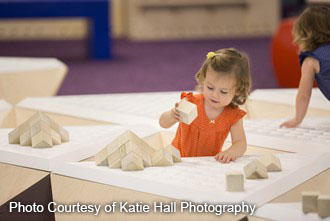 According to Zero Population Growth, Naperville has been named among the top five "kid-friendliest" cities in the nation since 1997. In 2014, the DuPage Children’s Museum was rated the Reader’s Choice Best Museum by Suburban Life. In 2015, Gov. Bruce Rauner proclaimed September 19, 2015, as DuPage Children’s Museum Day in Illinois. In 2016, the museum received a Citation of Merit for the Pyramid Bench from the AIA Chicago Small Project Awards.

No stranger to accolades, the Naperville Public Library has been named the No. 1 Public Library in the U.S. in 100,000 – 250,000 population category for the last 10 years and is a beacon of pride to the entire community.

We invite everyone to explore all that Naperville has to offer. We hope you love it just as much as we do!

View a listing of the many awards and distinctions that the City of Naperville and some of its intergovernmental partners have received over the years.

Find a Home in Naperville

Based on information submitted to MLS GRID as of Jan 20, 2022 5:19:am. All data is obtained from various sources and may not have been verified by broker or MLS GRID. Properties displayed may be listed or sold by various participants in the MLS. Supplied Open House Information is subject to change without notice. All information should be independently reviewed and verified for accuracy. Properties may or may not be listed by the office/agent presenting the information.

IDX information is provided exclusively for consumers’ personal non-commercial use, and may not be used for any purpose other than to identify prospective properties consumers may be interested in purchasing. Data is deemed reliable but is not guaranteed by MLS GRID, and that the use of MLS GRID Data may be subject to an end user license agreement prescribed by the Member Participant’s applicable MLS if any and as amended from time to time.

The Digital Millennium Copyright Act of 1998, 17 U.S.C. § 512 (the “DMCA”) provides recourse for copyright owners who believe that material appearing on the Internet infringes their rights under U.S. copyright law. If you believe in good faith that any content or material made available in connection with our website or services infringes your copyright, you (or your agent) may send us a notice requesting that the content or material be removed, or access to it blocked. Notices must be sent in writing by email to DMCAnotice@MLSGrid.com.

The DMCA requires that your notice of alleged copyright infringement include the following information: (1) description of the copyrighted work that is the subject of claimed infringement; (2) description of the alleged infringing content and information sufficient to permit us to locate the content; (3) contact information for you, including your address, telephone number and email address; (4) a statement by you that you have a good faith belief that the content in the manner complained of is not authorized by the copyright owner, or its agent, or by the operation of any law; (5) a statement by you, signed under penalty of perjury, that the information in the notification is accurate and that you have the authority to enforce the copyrights that are claimed to be infringed; and (6) a physical or electronic signature of the copyright owner or a person authorized to act on the copyright owner’s behalf. Failure to include all of the above information may result in the delay of the processing of your complaint.